I already went through THIS when OSD broke down because of a SCCM 1702 bug fixed in Hotfix Rollup 1, that generated multiple “Unknown computer” entities and the task evaluation didn’t manage to find something valuable.

So again I found myself fighting against a THERE ARE NO TASK SEQUENCES AVAILABLE FOR THIS COMPUTER error. 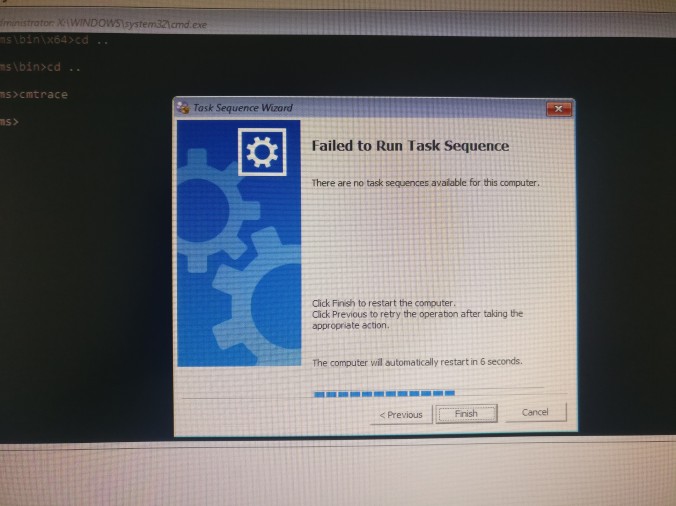 Why? I wish I knew. I checked every log i know of, none of it was helping.

So I started the Google Machine:

I was in the exact same situation.
Searched for the unknown x64 entity ID and searched for it in the systems table

That’s the name of a computer that I deployed hours earlier, for some strange issue it got the same UID as the “Unknown Computer x64” entity

Deleted the machine from SCCM Console and from AD, rerun the PXE boot and…

As I stated before, I already did this https://www.reddit.com/r/SCCM/comments/69ghqk/sccm_1702_osd_issue/dhr9nfv/ to fix the issue about duplicate unknown computer entities EVEN AFTER APPLYING THE 1702 HOTFIX ROLLUP 1 which didn’t delete the unknown entity duplicates automatically, but this one was completely new for me.

EDIT: this didn’t stop it! I ended up having multiple machines with the same ID in the database, despite i deleted them from the console.

A new computer (the same I tried to deploy previously) in System_DISC appeared after i launched a task sequence on it.

I’m gonna try to delete the entries from the database as explained HERE, let’s see if this sh*# goes away. I wonder if this happens because usually I copy task sequences from an existing one when I have a new model to deploy, but it seems unlikely.

And let’s relaunch a task sequence.

This time the notebook deployed succesfully and the UID is something unique, so I’m gonna assume everything is alright.

The client registered with a normal GUID this time, but yet i don’t understand how all this s@§£ could happen

I will proceed in further testing keeping my eyes open